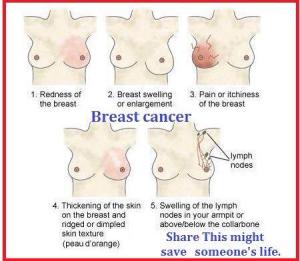 So I found this on my Tumblr dash. Hopefully I followed the thread correctly (I’m still not a blogging expert) and went to the source who posted the graphic AND this caption: “Saw this somewhere else and felt the need to post it cause no one else ever really tells you this stuff”. There were many more comments, but I had to cut them out to get this (not very clear) screenshot.

Unless it is fake, or contains misinformation, the blog is run by a 14 year old black girl (I am not using the PC African American because I’ve no idea if she is American). I have sent her(?) a message via Tumblr but do not expect a reply; and am cautious in believing the blog is real, as I was one of those fools that messaged back and forth with the Goldbergs on Tumblr, only to learn that the blog was run by a woman who only pretended to have terminal cancer, just for attention.

The post has been liked and/or reblogged over 75,000 times, so lots of people (hopefully most are real people with real blogs), all ages, nationalities, genders, agree. All these people think no one tells them this stuff, so they are trying to get it out there. Where the fuck did all of the awareness dollars go, if so many people think this information is not out there enough?

Is it because of pink over saturation that people no longer notice facts unless they are presented in some non-pink, non-October way? Is it the fact that pink marketing has targeted a very select group—(usually) white women of a certain age who buy products—and left all other demographics out cold? Is the fact that the message of pink marketing only includes very select facts about breast cancer, selling their target audience/customers a message on which The New York Times Magazine article (not even linking it here, I know everyone has read it) commented “…well-meaning awareness has ultimately made women less conscious of the facts…”? Is it some insidious combination of all of the above?

I mostly agreed with The New York Times Magazine article; it was basically a condensed version of tons of other pieces I’ve read since getting breast cancer my own damn self. The main part I did not agree with had to do with fear, and I may or may not post about that later. But I will tackle a little bit of it here, because apparently it is a factor.

According to the article young girls are getting “I (heart) boobies” bracelets, taught SBE, and Dr. Susan Love says, right in this article, “…but educating kids earlier — that bothers me. Here you are, especially in high school or junior high, just getting to know to your body. To do this search-and-destroy mission where your job is to find cancer that’s lurking even though the chance is minuscule to none. . . . It doesn’t serve anyone. And I don’t think it empowers girls. It scares them.”

Yeah, they are scared, they see lots of pink and boobies crap talking about cancer, and they probably have someone in their life with cancer. But getting no real information, they get on the internet for info that maybe does not give the whole story, presented in a kicky graphic (have no idea who created the graphic or if it was produced using pink dollars). Is this preferable?

Yes I agree that awareness has reached an over-saturation level in some demographics, because I am in that target customer group, so I’m sick of awareness too, but I’m not sure everyone got the real or whole story. In fact, maybe no one ever gets the real story until they do get breast cancer, or someone close to them gets it.

Can awareness campaigns please start putting the real facts out there, and do away with boobies and pink ribbons? I think people can handle it now, we don’t need to see half naked women to understand cancer anymore. Grow up media and marketing.

3 thoughts on “Failure of Awareness”