I’ve written before about all that advice one gets at the time of diagnosis–mostly about how much I dislike the “avoid the Internet” cries. Some bits of advice worked for me (don’t eat anything I love during chemo, I’ll wind up hating it–yeah, kind of true for me & suck on ice chips during infusion to prevent mouth sores–no didn’t work for me). One other bit of advice I cannot quite make up my mind about was the clothes.

My friend/guide (who died of metastatic ovarian cancer a few years ago) advised me to wear shirts with a few buttons at the top during infusion to provide easy access to the port. Yeah, that was pretty good advice. A few breast cancer-centric groups/pamphlets advised button up shirts for after surgery, as it would be difficult to pull shirts over the head after mastectomy or even lumpectomy.

Here’s the thing–I hate button up shirts. I’m more of a casual, pull-over type of gal. Even when I have button up men’s style pajamas, yep, I leave it buttoned and pull the top over my head. I just hate messing with them!

I’m fairly certain I heeded some of the advice just after my surgery. I seem to remember going back to my pull-over shirts as soon as I felt able.

The thing is though, I’m one of those people who has to wear an item of clothing out before tossing it. Or, since I’ve gained so much weight post-treatment/post-menopause, I have to really not fit into it before donating. This is in spite of hating those button up shirts. This is in spite of having bad cancer memories associated with those clothes.

I realized recently I’m down to 2 items of clothing from that time. One is a pair of soft, comfy yoga pants I remember I wore nearly every Herceptin infusion day. I mean, in the beginning, while on the Red Devil, right after I was diagnosed, I tried to wear jeans, look like I was just going to the store of something. I quickly learned not to give a shit–to just be as comfortable as possible. I think everyone knows I’m not the heels and boa wearing kick ass warrior type by now. Amazing the damn things still fit, considering my weight gain, and how much I’d lost during treatment. 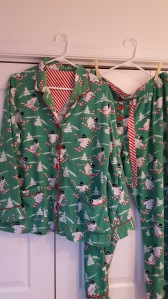 The other item is this set of Christmas pajamas. I still have them, wear them even, despite the bad association–hating Christmas 2010 because I was still “newly” diagnosed, and sick and so, so frightened. I still wear them even with the damn buttons–and yes I just pull it over my head, buttons be damned. I don’t hate them, I tolerate them.

But the other day I found a hole in the leg. I think after the new year begins I’ll let them go. Besides, I have a nice Darth Vader onesie type thing. It has no bad memories (the prequels, Star Wars 1,2, and 3 don’t count). I don’t have to button it up or pull it over–I step into it and zip up.

And rule the Galaxy! Just kidding.

It’s nice to get rid of these cancer associated items. Even if I do have a hard time throwing stuff out.