Three times a year everything gets weird, slows down. In May/June, when I get my annual diagnostic mammogram. Then in September, when it’s time to see the oncologist (although maybe this year will be the last time, fingers crossed), and then when I see the gynecologist, although that’s the least worrisome (sometimes). So the first and worst approaches, this Friday.

I tell myself I shouldn’t be so paranoid, shouldn’t dread this so much. Then the other half of my brain perks up and reminds me of being so caught off guard when I got my first-ever mammo back in 2010, got that false negative, and then a month later had a whole bunch to worry about.

Yes, I am worried that I am not worried enough.

So I do this dumb thing, every year. I cannot plan beyond the date of the mammogram. Well, not literally of course. I have work gigs set up for the next couple of months, even one for later the day of the mammogram. That’s something I usually avoid. I remember all too well taking a morning off from work that one day, thinking what an annoyance it was to get an inverted nipple checked out. Then spending the rest of the day bouncing around various hospital screening departments. Even seeing a breast surgeon that very same day (who moved away shortly after I met her, so she was never really a part of that whole thing).

It’s odd that my memory of this so clear, that I’m so marked by it to the point I am still, STILL, skittish about making any plans for the day I get a mammogram. I get very focused on the day (Friday, this time) and cannot allow myself to imagine what I will do on Saturday. 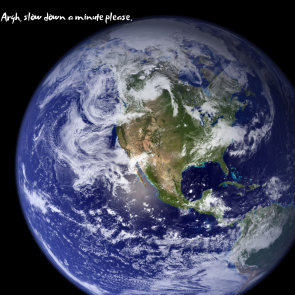 Because I still half expect my world to get turned upside down. Again.

I know enough now to know this feeling will never go away. Yes, the dread “lead in” time is less. I’ve only begun to fixate on it today. I am so good at distracting myself now that I can hold the panic at bay, for a little while. Being busy with work helps, being an angry political activist helps, YouTube helps, stupid cat memes help. Until today.

Today I cannot think about anything beyond Friday and am vaguely annoyed by a world that keeps on spinning, by people looking forward to things that will happen later this summer. I want everything, the whole world, to just slow down for a minute, until I can get Friday over with.

Then I can go forward again.

I asked myself today to be at peace with this thing I do, this stupid habit of panic and anxiety. I cannot. I still find all of this unfair. I know “it’s not fair” whining doesn’t help, doesn’t matter. But I still feel that way.

I still hate this.

5 thoughts on “When My World Slows Down”