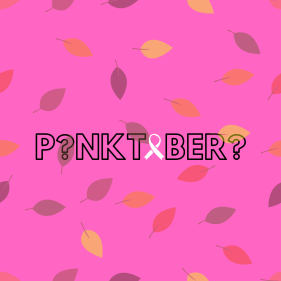 I’d been running around and I noticed a truck at a local dealership had a “Pinktober” decal on it. I know I saw it when I passed it by like an hour or so before, and apparently instantly forgot about it. When I saw it that second time, I had a vague memory of seeing it earlier in morning. But it didn’t hit me/annoy me until that second time I passed by it.

After the momentary annoyance of seeing a truck decked out like this, with a joyful, festive look (yes, there were pink balloons tied on other cars), I kind of freaked out. It took me 2 ride-bys to register this atrocity. Or wait—I’ve been traveling Rt 1 all month, how long has it been there? It was the freakin’ 28th! Soooo, do I just not see this crap anymore now?

And hang on, I thought the word “Pinktober” was a term of derision used by those of us who dislike all the Pink crap to sum up all the hell that the month contains? So, what…now it has been taken and used in exactly the way it was meant to mock? Am I remembering wrong?

This wasn’t the first jarring event, to be honest. The other morning I was doing my work and noticed it was the 27th. Two whole days beyond the 25th, the anniversary day of diagnosis. I just zoomed by, doing all my stuff, and didn’t even think about it. It’s not like I’m unaware of the date of each day—my jobs depend on knowing the date, the day. I guess I got so focused on the tasks scheduled for my day, Friday, October 25, that I….just…forgot. Or more like, lacked the mental space for my brain to process.

I mean, it’s not like I “do” anything to mark the day, and I don’t dread it or get depressed or anything—I don’t observe dates/holidays like that. It doesn’t matter—in that way, I guess. The residue of having had cancer is an every-damn-day kind of thing. A few weeks ago, I experienced a wave of anger about being a former cancer patient, almost as intense as when I was fresh out of treatment. I think I was tired and was just overwhelmed that cancer has stolen my vitality. I should be able to do more without fatigue. My anger bubbled up in a way it has not done in a while, but it cooled back down to my usual simmer.

I guess this is all kind of good. I didn’t get stressed by the Pinktober crap because I don’t “see” it—even when it’s there. I’ve commented to some of you that it seems less in your face this year—but I wonder if my perception is up to snuff. I mean, that Pinktober truck—maybe it was there all month! I honestly don’t know! As for missing my awful date, I guess that’s OK too, I never want to relive that moment.

But on the other hand, I don’t like all my hustle and bustle. October is over and as a Halloween lover, I feel like I missed out—too busy and distracted even while chiding myself to ENJOY FALL. Well, I cannot blame just being busy—I blame the weather too. The other day I sat watching Laurie Strode in her 1978 sweater fashions and Mike Meyers in his jumpsuit, while I sweated in shorts. All I could think was, aren’t they hot? The lingering summer in my region just kills that “Halloween” vibe.

The hustle bustle and distraction can provide a healthy distance. But losing connection, not being plugged in—to the good things (Halloween) AND the bad (Pink crap)—is less healthy. I regret my distance from the cancer world at times. I’ve written 3 whole posts in recent weeks, counting this one, after leaving it unattended for months on end. I forgot that writing helps me, even if it’s anger and annoyance that forces me into a chair to do some writing. I usually feel better afterwards.

I cannot promise to keep up, to post more. I still get so tired and upset at times that mindless scrolling or movie watching can help me. But I will try.